Typepad is still blocked in China and two other china blog services are still down. (Just got a comment from Jessica that Blogbus and Blogcn have regained service!!) Probably remain that way forever. As I said in the other post, there is not much we can do, which is the most frustrating part of the whole thing. I am so aware of that. I turned my site black because in the light of the silence, I had an idea, that was right for me, and I did it. I didn't ask anyone else to do the same, just put it on their blogs, pass the news on and over 50, 60 70 other people around the world did, and many turned some part of their site black. Maybe in the next few days there will be more. Maybe we can get 100 blogs around the world to do the same. One Hundred would be a nice round number, but we will see. It's all symbolic but the event got logged and more people than I thought would ever care, did what they could, which was publicize it. Wow.

And I wondered when to change my site back. In a week? In a month? At some point we move on because we must. Then Single Planet had an idea. He's going to keep his site black for forty days. And forty days ends on May 3rd, which is WORLD PRESS FREEDOM DAY. That's perfect to me. I am with him.

And I do want to add that in retrospect I should have done this when blogus and blogcn (mainland blog sites) were shut down last week, but I wasn't even aware until the day I was blocked. This is not just for typepad, but for all the mainland bloggers as well. Shame on me for not putting two and two together. But sometimes we click on to what's happenning because it happens to us. Which is why, maybe it's suprizing to me that so many people put in their say, when it's not them. We should care more. I should care more. 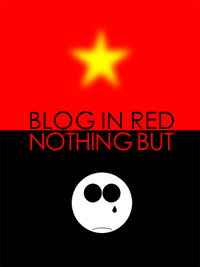 I hope this means that the Typepad blockage is temporary also. I have no clue what's compelling the Chinese government to block and then unblock these blog sites, but maybe they'll just stop blocking all blog sites since people get very angry about this.

thanks for that. Great news!

Hi, I opened a help ticket in my account to alert typepad to the closure.

I suggest that if it happens again you do that directly.

(forgive me if I am teaching my grandmother to suck eggs, but you open a help ticket by going to the front page of your account and then clicking on control panel, then on the help tab, then on the "open ticket" line )

May 3rd huh? sounds good to me; plenty of time to work on a new layout as well :)

I'm not sure of this.. but I think blogcn and blogbus came back online just a little bit before typepad got blocked, if it's important.

I am not sure about the blogcn and blogbus either. I have heard different things. Well it's back online that's all that matters. When is a little suplufious (Love my spelling).