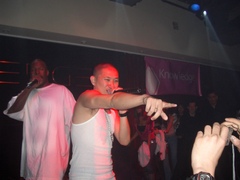 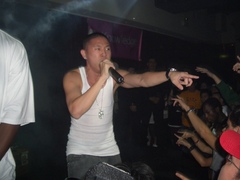 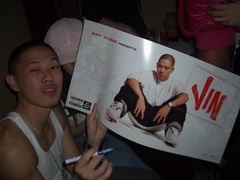 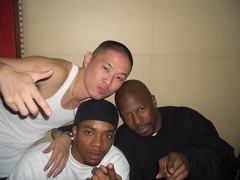 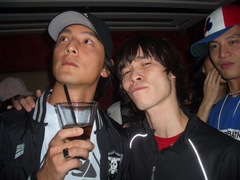 I really wanted to see MC Yan (previously LMF). He couldn't turn up due to some ego, drama, face thing in the "Scene", that had nothing to do with MC Yan at all... I think the whole thing affected the show somewhat. The kid is a better rapper than ever, he's got some good and intelligent rhymes, but the vibe just wasn't the same as last time. And it started 3 hours later than we thought it would, as  MC Yan couldn't come.. The audience was pretty grumpy and tired by then. A bit of a shame really. Was I tripping but did Jin not do his single, "Learn Chinese?" Isn't that the song he's famous for? Odd. Also missing from his last show was the Canto/English translation rap. That went down so well last time. It earned my respect. And the bi-lingual audience loved it. Bring it back! Hope he even comes back. In certain respects Hong Kong wasn't exactly welcoming this time round. Except the girls. (Present company excluded, thank you.)

r.e. 'learn chinese', you are tripping, but the canto translation was definately lacking

Hi Yan, thanks for the pix. Jin has been famous long before his Ruff Ryders album and "Learn Chinese" first single. He's an underground MC battler freestyler - built tough on the forums/internet sites around where people would duke it out on the mic over the net. Amazing, eh? Anyways, keep it hot. My kid bro, SHAUNTAI.com, has some great cuts (the whole JIN collection). Hit him up for music.

Hi, yes Jin's getting better everyday. You probably know this but just in case you don't, there's two very good websites that have a lot of information on Jin, along with exclusive tracks, mixtape tracks, and other type of media. Updated all the time! Please tell everyone about these websites and spread the word about Jin, he needs all the promotion he can get! Thanks.

This is only a preview. Your comment has not yet been posted.

The letters and numbers you entered did not match the image. Please try again.

As a final step before posting your comment, enter the letters and numbers you see in the image below. This prevents automated programs from posting comments.

Having trouble reading this image? View an alternate.

(Name is required. Email address will not be displayed with the comment.)