Today is the 16th Anniversary of the Tiananmen Massacre. 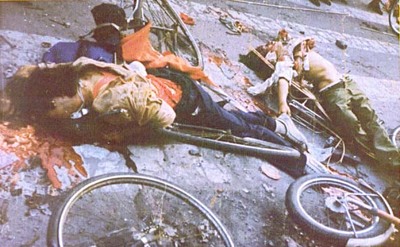 Today is the day of that one photo, the one everyone remembers, you know the one I am referring to, its lucid, calm symbolism etched into the minds of millions, the photo Wang Dan has over his bed in his dorm in Harvard University, the one that has and will gloss every story regarding Tiananmen Massacre forever more. And as much as I too evoked it a month before, on this day, I don’t always feel it appropriate as the sole photo and symbol for the events of this day, for what that one picture does is sanitize the true story of June 4th 1989.

That early morning on June 4th 1989, Beijing was wreaked with chaos and blood outside of veins reigned. All across the city, long before the soldiers reached Tiananmen Square. On June 3rd day, as the PLA started coming in, the residents of Beijing already began to build barricades to stop those under orders to end a counter-revolutionary insurrection, by whatever means. Tear gas was sprayed, canisters exploded into the crowds, and as the tension rose, more people filed onto the streets, Beijing the city decided to protect their young in the heart of China. By night fall the riots began, military vehicles alighted, the protesting students who were unaware of what was going on outside, finally heard the news and began setting fire to their tents. June 4th 1989 was not just a day when tanks rolled and one boy for a short moment attempted to halt its march but a day when the city of Beijing rose against their own government which by all means should be known as an uprising.

It was an incomprehensible day because few and seldom days in history do we ever see a government launch a military attack on its own people. And in the backdrop students sang the “Internationale” and the residents of Beijing shouted “Ting Si, Ting Si” -Stop the killing, Stop the killing” as machine guns fired, people fell, tanks did not stop, and hospitals overflowed.

We love that photo because for a very short moment in time, we were able to witness a nameless every man who had enough human bravery to stand up against the machinery of death and the power of a repressive government. And for the sake of perfection, on the other end, we had a tank driver who did not keep going because his heart also did not allow the metal he was in control of to do the deed. But that is not what happened in the early mornings of June 4th 1989. Human bravery did not triumph against the machinery of death, when the bullets hit soft flesh, no amount of will could stop its outcome.

That one photo should not symbolize June 4th 1989, and what China did. It may symbolize human spirit, the hope of democracy, the devotion to the cause. It may remind us of that each of us can make a stand, and we could face the inevitable without fear. But it does not speak of June 4th 1989. It does not explain the anger so many of us feel towards our government, and why we still to this day still demand a reevaluation.

What happened in June 4th 1989 was bloody, violent, chaotic, disturbing. It was littered with tragedies of sons and daughters not returning home. It was a day where other tank drivers did run over people, gun shots went through the chest, heads were exploded, and limps lost. It is a day that we should remember, not because one person out there stood up, but because our government brought him down. It’s not a day to celebrate humanity. It’s a day to mourn.

"we were a silent, hidden thought in the folds of oblivion, and we have become a voice that causes the heavens to tremble"

we will never forget....

Thank you for your forcefulness and eloquence. You're right. I've ammended my own site accordingly. I hope you don't mind the image theft.

yan,
i hope you will forgive me for using the tank image on my post about the murders. it is what i remember most, since i saw it when i was 9. i've added your photo to give my post more impact.

It's half past midnight here in Seattle, US, and knowing what day it now is I came to glutter.org for Yan's perspective on this day. While I of course remember that dude in front of the tank, my visual memories from TV of that last night and day are of the beautifully, and tragically, determined people in the Square marching with their banners and singing the Internationale. All that makes this day any less ghastly is that I can't wait to read the book based on Zhao Zi Yang's conversations about Tien Amin and the course of modern Chinese history. I'm sure it'll be painful, but inspiring as well. And while we're mourning the victims of June 4 let's not forget the democracy and freedom they died demanding, and fight for the same in our own nation's and together globally.

First, I want to compliment you on such a well written article. Nicely done!

Second, I agree that the photo of Wang Wei Lin challenging the PLA tanks on Chang'an Ave on June 4th 1989 should be the sole photo for representing the events that took place on that day, but certainly, for me, it is the most powerful.

The photo itself shows one unarmed man challenging four tanks, but (again, to me) it represents the thousands of unarmed Chinese citizens that stood up to an army of brutal old men in an attempt to let their voices be heard.

The CCP called them 'evil reactionaries', but in fact, they were the truest of patriots who held the highest of hopes in seeing China prosper as a nation ruled by law for the people, by the people. It's just ashame that they really had no idea how to do it.

That's just my opinion though.

(btw, hope you don't mind my adding you to my blogroll.)

i don't think his identity has ever been confirmed...

Ya gordon. Not argument on what you are saying... .

Tim. Damn, you don't need to apologise you do what you want.

And no I have no probs with image theft. I stole that of somewhere as well but it's been so long I can't rememebr where I got it. Although I am sure the orginal link is embedded into Glutter somewhere.

Wonderful post. It's the equivilent of a finger to the same govt that demand that all people in the world do not talk or even think about then events of 1989.....they want the world to forget it ever happened and to forget all those people who lost their lives so that the high officials can continue to plunder and pillage the nation's wealth and divide the economy among themselves like some big cake.

Time is on our side and we can wait for as long as it takes while we watch the govt rushing around like a little fire engine trying to put out all the fires in society.

The Chinese people will finally win this struggle, of that I'm sure. The present leaders have robbed the rest of the world of the Chinese nation, I'll be the first to raise my glass when it returns.

I often consider whether economic improvements (I use the word improvements because (a) China esentially began from pretty near to nothing (b) apart from the govt dismantling the worst excesses of Maoist folly, they've done little else and (c) I'd question just how far the economic reforms have spread in improving the lives of normal poeple) are really an end in themselves.

I.e. is it enough for people to enjoy a certain amount of economic freedom and little else? What price are the Chinese people paying for the slightly more open economic environment?

I would guess that most people would answer a resounding "No" to the question, 'Is an open economy enough?'

I believe that freedom of thought, of speech etc. freedom to explore ideas and express views and opinions is what China is very sadly lacking. How much longer can the govt keep this fundamental freedom from the people with outright opression? With luck, the fact that the very same govt is also robbing the country blind might work against it in the long run.

Many Chinese people over the years have said to me that they certainly don't feel as if they live within any kind of "restrictions" of freedom etc.

This is ultimately misleading and reminds me of the phrase "You don't miss what you've never had". Also, Chinese people instinctivly know what they can and cannot say, they've been brought up this way. How on earth can people who have never enjoyed freedom "miss" and therefore demand it? It's a tough one.

Realistically, I think we'll have to wait for the next generation to grow up before people in China start to demand basic freedoms and realise that they no longer want to live somewhere where any challenges to the govt and/or challenges to the political system are crushed by the full force of the state in the name of stability.

It's ironic that, of all the officials I've ever come into contact with, all their sons and daughters were studying or had studied abroad. The same people who decide to censor large amounts of information and whip up xenophobia and a general distrust of the west nearly always send their children to school there.

God forbid that their children receive a "Patriotic Education" and have their minds twisted, pumped up with nationalism and all chances of independent thought lost forever.

If and when the Chinese people next begin to demand greater freedoms I hope the then govt has enough Hu Yaobangs and Zhao Ziyangs to give up power peacefully and not repeat the bloody mistakes of 1989.

wow martyn. I can't see the ccp giving up inch of power because, as you point out, their fingers are in all the ecomonic pies. One thing about the economic reforms is that the first people to get rich were the communist officals and they contiue to get richer.

I wonder how many Chinese people have read George Orwell's "Animal Farm".

While it was about Soviet Russia, it's pretty clear that it applies to China as well.

I'm sure a chinese translation of the book would be contraband of course.

I came to know about your site from IEEE spectrum. I was deeply moved by your writing on tiananmen square. I remember i was a 10 year old and remember the tv images. Icome from India- which is sorrounded by mostly autocratic ruled countries. I do hope the world will be a better place and all that happened on 4th June will not go waste. Truth will prevail and Good will always win.
Regards

Yesterday,my friend,in beijing university sent me a video about this event.We've been longing for the truth since all the news was eradicated by the government.After watching it,i was shocked,totally,by the blood and the spirit they showed to the poeple."We want to use death to lighten the sky of the land"----Chai ling....

The students in China are systemlise(im not quite sure the word i use),i mean, we are forced to accept the idea.We go to college,and educated by the mother-fuckin teachers,and then become the tools of the government!shit!We want a true,clean world.We don't want to death as a tool!Please,do something to let us know the true history!