Home Yan's Writer Website About Awards & Press Archives
Speech by Hong Kong Protester after Being Given Bail
A Letter from a Principal Reminding Us to Look After Our Children and Ourselves in this Dark Time.

I know police brutality has increased so much over the weeks. I still don't comment on police actions for personal reasons but it's getting harder and harder not to. Watching the video of the police storming the MTR train and then beating people indiscriminately was hard to watch. But what I do feel really strongly about and can comment on are the arrests of at least eight law makers and activists before this Saturday, which was the anniversary of the judgement, that blocked a free vote for the Chief Executive, that launched the Umbrella Movement in 2014.

This is completely CCP protocol, before any big date, they will arrest people who are related to the protest movement. It doesn't matter who they are, whether they are active at that moment, or whether they are even particularly related to the event of the date, as they will put family members of those who they take away under house arrest in case they cause any trouble.

I know for some people it's been difficult to understand, as Joshua Wong and Agnes Chow are no longer the head to The Resistance, and this round of protests. However, they are related to the last round of protests and that's enough to have them taken away. The fact, they were allowed out, I believe is an act of deescalation, as their arrests hit headlines all over the world. As they are famous names and faces. As you can see, they have not yet freed the other less known legislators & activists yet.

The only reason there are so FEW arrests is that Hong Kong is still under the Basic Law, and the Hong Kong police has yet to be able to arrest people without a reason for a certain period of time without charges, and let them out when enough time have passed to mitigate any influence they have. So they, for now, are able to arrest those who they had charges against before the date.

The police have made a statement that they didn't make those arrests for any political reasons, it just happened to be the date they have gathered enough evidence for the arrests. I don't like conspiracy theories, but I don't believe them. Maybe the people who made the arrests did not plan the date, but someone did, up top. Someone whose ear is close to China.

So whether purposeful or not, a number of activists and law makers have been arrested.

Instead of scaring protesters away by the arrests, they have hardened the resolve of the radical protesters. The first time the protesters set a massive fire was last night. They have, of course, shown great restraint as with many protest movements, the fires are set on the very first day.

My friend asked me how I was feeling. I said that I was livid and distressed by the arrests, but have since felt better now a group of people have burned some things.

It's true. I don't really know what else can be done. Surround the stations and burn something closer to where they are holding those arrested?

Distance doesn't change the dynamics. It's really just symbolic of our anger that's all.

I don't know how much I believe in "Lam Chau" (攬炒), which means embrace and fry. It means that if China destroys us, we will take them with us. I don't know the feasibility to that. But in my angriest that's what I feel. I know a lot of moderate people, people who've lived a very normal life, who've raised their families conservatively, who talk between themselves about "lam Chau” at their angriest as well.

I'm tired and very distressed at the arrests of the activists. I feel like sometimes we obsess about what the police did because it's easier to retweet the images of the brutality, and rage against it in 480 characters than discuss the political implication of what has happened.

As I stare at the screen, I too feel speechless despite wanting to talk about it. Maybe I just need a little time. Maybe that's an actual article instead of a stream-of-consciousness blog post.

So maybe until I can put coherence to my thoughts, I can only leave a picture of a fire lit in anger. A statement of standing by my city. A wish to liberate Hong Kong, and that would be the revolution of my time. 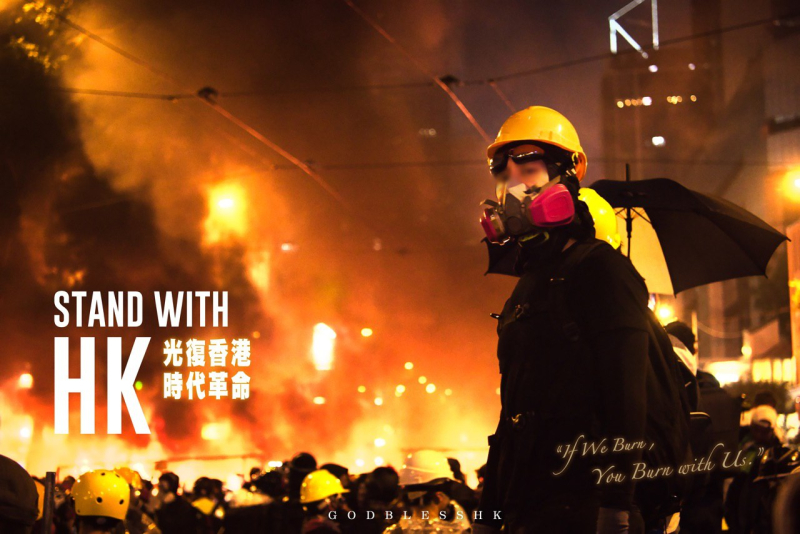